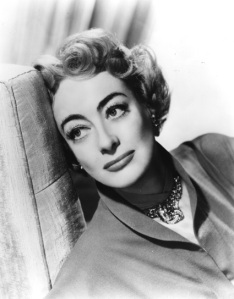 Love is a fire. But whether it is going to warm your hearth or burn down your house, you can never tell.   Joan Crawford

Joan Crawford (born Lucille Fay LeSueur; March 23, c. 1904 – May 10, 1977) was an American film and television actress who started as a dancer and stage chorine. In 1999, the American Film Institute ranked Crawford tenth on their list of the greatest female stars of Classic Hollywood Cinema.