I don’t care to belong to any social organization which would accept me as a member.  Groucho Marx (1895-1977) American comic actor

History does not long entrust the care of freedom to the weak or the timid. Dwight D. Eisenhower

October 14, 1890 – March 28, 1969 Eisenhower was the 34th President of the United States from 1953 until 1961. He was a five-star general in the United States Army during World War II and served as Supreme Commander of the Allied Forces in Europe; he had responsibility for planning and supervising the invasion of North Africa in Operation Torch in 1942–43 and the successful invasion of France and Germany in 1944–45 from the Western Front. In 1951, he became the first supreme commander of NATO.

He was not a bad looking young man.

A neat place in Gettysburg, PA the Eisenhower Farm, less than a mile from the stepping off place of Picket’s Charge. 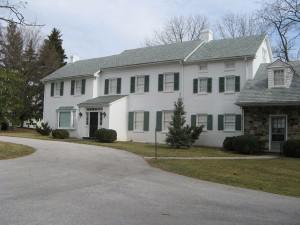 You gotta admire a guy who can talk his wife into letting him putting a putting green in his backyard.

It is listed as a National Historic Site.