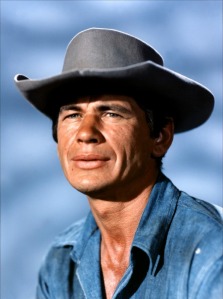 Great speech by Charles Bronson in the movie the Magnificent Seven

From IMDD a brief summary if you have not seen it. A bandit terrorizes a small Mexican farming village each year. Several of the village elders send three of the farmers into the United States to search for gunmen to defend them. They end up with 7, each of whom comes for a different reason. They must prepare the town to repulse an army of 40 bandits who will arrive wanting food. An Americanization of the film, Seven Samurai

This is O’Riellys (Bronson’s character) response to a boy who calls his own father a coward.

Don’t you ever say that again about your fathers, because they are not cowards. You think I am brave because I carry a gun? Well, your fathers are much braver because they carry responsibility, for you, your brothers, your sisters, and your mothers. And this responsibility is like a big rock that weighs a ton. It bends and it twists them until finally it buries them under the ground. And there’s nobody says they have to do this. They do it because they love you, and because they want to. I have never had this kind of courage. Running a farm, working like a mule every day with no guarantee will ever come of it. This is bravery. That’s why I never even started anything like that. That’s why I never will.

A fellow Pennsylvanian like yours truly, he was born a little east of where I grew up, and he was a coal miner for a short time till he served as a gunner on a bomber in World War 2, during which he received a Purple Heart.