Push some more, you feel the paddle touch the bottom of the river among the rocks and the canoe moves off the rock your canoe was hung up on. The rock has been scrapped enough now that it has silverish metallic scratches on it and it will collect some more aluminum from two or three keels this summer if business is good at the outfitter.

No whitewater on this river. Just a lazy meandering flow of four miles per hour through some beautiful deciduous and coniferous trees. The pine trees are mostly planted along the edge of the river between the Clarion River and the aptly named River Road.

Why when they were planting trees along the River Road in Cook’s Forest did they plant Pine trees. Well the reason that the Pa. Dept. of Transportation (PENNDOT) would give would be quick growth to prevent erosion, but secretly they knew that with pine trees come pine needles and pine cone, things that are painful to step on when trying to dry your feet off when coming out of the river.

Navigating the Clarion river should be only be done in old sneakers, you know the ones, the ones with the holes in them, the ones you wore all last year to school, you even wore them out in the snow and slush when your mom just rolled her eyes and gave up on trying to get you into boots. Yes those sneakers, that you have ran around in all summer, mowing grass without sock on, dragging them while riding your bike because something was wrong with your brakes, and definitely the ones you stepped on every hot tar bubble on the road with, just to see if you could hear it pop.

Do not go into the Clarion River with water socks, or athletic sandals, the river hates these sham shoes and it will fill them with gravel, and will throw every slimy rock in your way to make you slip if your wear something other then old sneakers.

The river itself is nothing spectacular, it does not even get in the top ten in length of rivers in Pennsylvania. The Clarion is only 110 miles, and empties into the Allegheny in the western part of Clarion County. The ten miles that pass through Cook’s Forest State Park is the major attraction in that state park, every trip I have taken to Cook’s Forest has had at least one day on the river, either canoeing, tubing or swimming/wading. It is hard to swim in a river with old sneakers on not that there are many places you have to swim, most of the river can be crossed with careful walking the water only getting as deep as four to five feet in some of the deeper sections.

But while the Clarion River is the main course in Cook’s Forest the rest of the side dishes are equally enjoyable. Cook’s Forest is a National Natural Landmark for it stands of old growth trees. Whereas a huge percentage of the forests in Pennsylvania have been cut down around the end of the 19th Century and the beginning of the 20th for the logging industry there are still some incredibly old trees in Cook’s Forest.   You can enter into these old growth areas and it feels almost like a cathedral of living green and brown.

To get an overview of the area I suggest the Seneca Overlook Trail which leads to rocky outcroppings looking over small portions of the river and the rolling hills covered with deep green forests. For those that are not afraid of heights or seemingly rickety rusty metal structures you can climb the eighty foot Fire Tower #9 and on a clear day see fifteen to twenty miles. There is a trail that leads down from to the river and is rated as a difficult 9 tenths of a mile, or you can drive up the aptly named Fire Tower Road a dirt road that starts just across the state run campground on Route 36.   This is a relatively easy walk and the parking lot near the Fire Tower has a bathroom and running water. 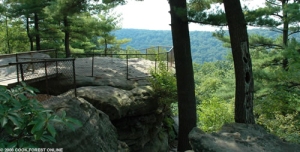 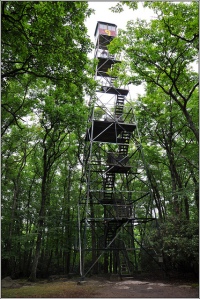 There are other campground outside the actual state park but I don’t think I have stayed in any of them since I was a very small child. My grandfather, Audley Forringer, owned a small Scotty Trailer and he would take it the a campground that was then called Shady Lane Campground, just outside the park. My parents, two brothers and myself, would stay in a blue and gray canvas tent that required all of my dad’s considerable engineering skill to erect, with its sliding poles, stakes and honest to goodness metal springs to keep tension on the structure.   My mother told me a story of how when I was very small , I let my balloon go and I just watched it float further and further away with a smile on my face, until I realized it was never coming back, then the tears flowed.   I also remember one Boy Scout trip where my younger brother Kevin got dared into jumping off a bridge, he eventually did it for a Coke and fifty cents.  Now with so many of those trips in my mind a lot of them blend together, family trips in one category and Boy Scout canoe trips in another.

Most of my trips center around the PA State Campground located up the hill from the river on PA Route 36. You can set up almost immediately inside campground.   The Ranger booth is located on the on the road that runs just past the playground. Sometimes it is manned sometimes it is not it depends on the season, day of the week or if a bathhouse needs cleaned.  You can choose from sites that have a spigot or electricity, all a have a picnic table and fire ring. These fire rings have cooked miles of hot dogs and mountains of s’more’s on wood sold by various enterprising locals. There are private campgrounds, and cabins, and I have heard tales of something called a bed and breakfast but I am not sure what that is or if it is just something made up to scare children.   After staying so many many nights in tents in Cook’s Forest I am hesitant to believe there is any other way to sleep there.

If the river is the steak in the meal that is the Cook’s Forest experience, and camping is the potatoes, then a few hundred things are the vegetable and the desert.   Hiking as mentioned earlier covers about thirty miles inside the Forest, horseback riding, history presentations at the Sawmill Arts Center.   Of course with any tourist area comes things not related to the natural beauty associated with the original preservation efforts things like go-karts, water slides, miniature golf, knick knack sales, freshly made fudge, ice cream and video arcades. I have participated in all these things, especially the fudge sales. There is one thing that we always seemed to end up doing on Saturday nights, we would go out to eat somewhere, and on the way back my father would take some side roads and we would always look for Whitetail deer.

What sets Cook’s Forest apart from the hundreds of other state parks in Pennsylvania. Nothing, there are other parks that are bigger (Hickory Run), other parks that have more exciting rivers (Ohiopyle) and some much more remote (World’s End), but this is a place I love, maybe because I am so familiar with it. Maybe I love it because I have so many great memories of it.

One more thing, the actual name is Cook Forest, but everyone I have ever heard talk about it have called it Cook’s Forest. 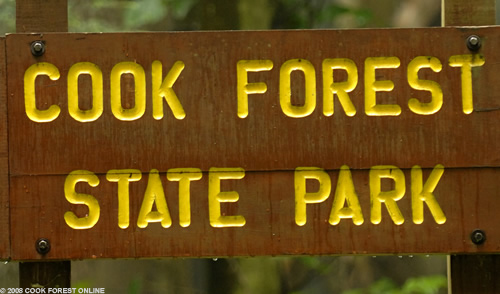 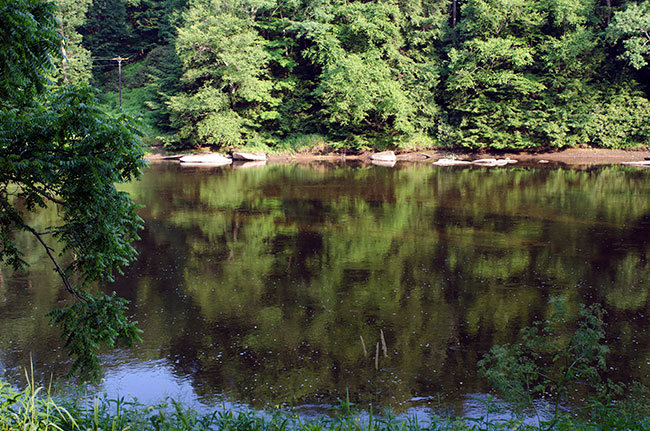 Next week: Washington, District of Columbia.