Inglourious Basterds (2009): In Nazi-occupied France during World War II, a plan to assassinate Nazi leaders by a group of Jewish U.S. soldiers coincides with a theatre owner’s vengeful plans for the same.

Lt. Aldo Raine: My name is Lt. Aldo Raine and I’m putting together a special team, and I need me eight soldiers. Eight Jewish-American soldiers. Now, y’all might’ve heard rumors about the armada happening soon. Well, we’ll be leaving a little earlier. We’re gonna be dropped into France, dressed as civilians. And once we’re in enemy territory, as a bushwhackin’ guerrilla army, we’re gonna be doin’ one thing and one thing only… killin’ Nazis. Now, I don’t know about y’all, but I sure as hell didn’t come down from the goddamn Smoky Mountains, cross five thousand miles of water, fight my way through half of Sicily and jump out of a fuckin’ air-o-plane to teach the Nazis lessons in humanity. Nazi ain’t got no humanity. They’re the foot soldiers of a Jew-hatin’, mass murderin’ maniac and they need to be dee-stroyed. That’s why any and every every son of a bitch we find wearin’ a Nazi uniform, they’re gonna die. Now, I’m the direct descendant of the mountain man Jim Bridger. That means I got a little Injun in me. And our battle plan will be that of an Apache resistance. We will be cruel to the Germans, and through our cruelty they will know who we are. And they will find the evidence of our cruelty in the disemboweled, dismembered, and disfigured bodies of their brothers we leave behind us. And the German won’t not be able to help themselves but to imagine the cruelty their brothers endured at our hands, and our boot heels, and the edge of our knives. And the German will be sickened by us, and the German will talk about us, and the German will fear us. And when the German closes their eyes at night and they’re tortured by their subconscious for the evil they have done, it will be with thoughts of us they are tortured with. Sound good?
Men: Yes sir.
Lt. Aldo Raine: That’s what I like to hear. But I got a word of warning for all you would-be warriors. When you join my command, you take on debit. A debit you owe me personally. Each and every man under my command owes me one hundred Nazi scalps. And I want my scalps. And all y’all will git me one hundred Nazi scalps, taken from the heads of one hundred dead Nazis. Or you will die tryin’. 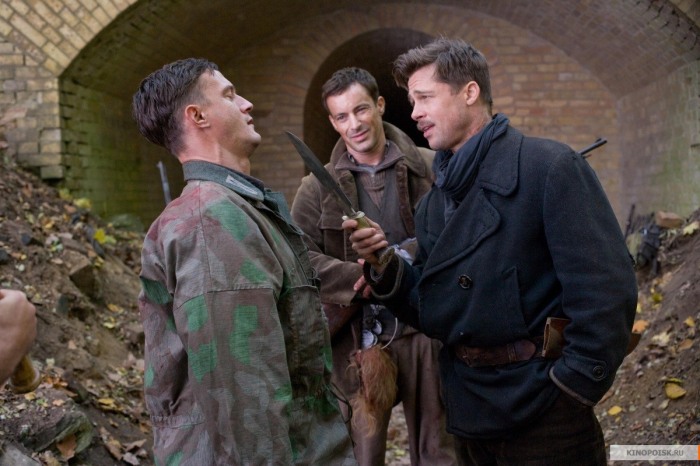