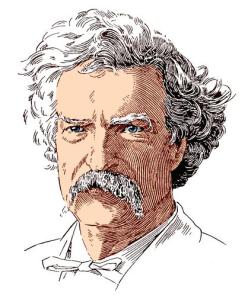 Thousands of geniuses live and die undiscovered — either by themselves or by others. But for the Civil War, Lincoln and Grant and Sherman and Sheridan would not have been discovered, nor have risen into notice.    Mark Twain

Samuel Langhorne Clemens (November 30, 1835 – April 21, 1910), better known by his pen name Mark Twain, was an American author and humorist. He wrote The Adventures of Tom Sawyer (1876) and its sequel, Adventures of Huckleberry Finn (1885),[2] the latter often called “The Great American Novel“.