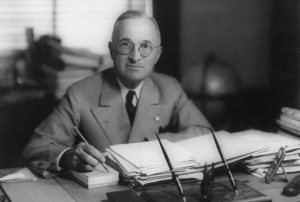 In reading the lives of great men, I found that the first victory they won was over themselves… self-discipline with all of them came first.    Harry S Truman

Harry S. Truman (May 8, 1884 – December 26, 1972) was the 33rd President of the United States (1945–53), assuming that office upon the death of Franklin D. Roosevelt during the waning months of World War II. He is known for launching the Marshall Plan to rebuild the economy of Western Europe, for leading the Cold War against Soviet and Chinese communism by establishing the Truman Doctrine and NATO, and for intervening in the Korean War. In domestic affairs, he was a moderate Democrat whose liberal proposals were a continuation of Franklin Roosevelt’s New Deal, but the conservative-dominated Congress blocked most of them. He used the veto power 180 times, more than any president since then, and saw 12 overridden by Congress; only Grover Cleveland and Franklin D. Roosevelt used the veto so often, and only Gerald Ford and Andrew Johnson saw so many veto overrides. He is also the only world leader to have ever used nuclear weapons in war, desegregated the U.S. Armed Forces, supported a newly independent Israel, and was a founder of the United Nations.