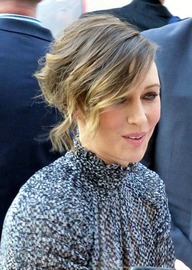 Someone once told me that religion is like a knife: You can stab someone with it, or you can slice bread with it.     Vera Farmiga

Vera Ann Farmiga (born August 6, 1973) is an American actress, film director and producer. She began her career on stage in the original Broadway production of Taking Sides (1996). She made her television debut in the Fox fantasy series Roar (1997), and her film debut in the drama-thriller Return to Paradise (1998).