Human judges can show mercy. But against the laws of nature, there is no appeal.    Arthur C. Clarke

An author of nearly 100 books, Arthur C. Clarke’s imagination and insight influenced modern science via works like his classic ‘2001: A Space Odyssey.’
Born on December 16, 1917, in Minehead, England, Arthur C. Clarke established himself as a preeminent science fiction and nonfiction writer during the mid-20th century. He wrote the novels Childhood’s End and 2001: A Space Odyssey, which was adapted into a film with Stanley Kubrick. Clarke authored nearly 100 books, and many of his ideas around science had links to future technological innovations. Clarke died on March 19, 2008, in Sri Lanka. 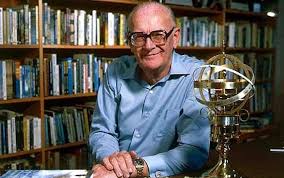