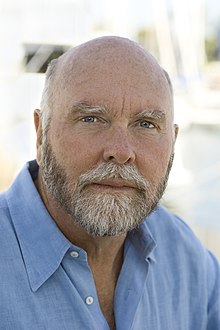 A doctor can save maybe a few hundred lives in a lifetime. A researcher can save the whole world.   Craig Venter

John Craig Venter (born October 14, 1946) is an American biotechnologist, biochemist, geneticist, and businessman. He is known for being involved with sequencing the second human genome[1] and assembled the first team to transfect a cell with a synthetic chromosome.[2][3] Venter founded Celera Genomics, The Institute for Genomic Research (TIGR) and the J. Craig Venter Institute (JCVI). He was the co-founder of Human Longevity Inc., served as its CEO until 2017, and is executive chairman of the board of directors.[4] He was listed on Timemagazine’s 2007 and 2008 Time 100 list of the most influential people in the world. In 2010, the British magazine New Statesman listed Craig Venter at 14th in the list of “The World’s 50 Most Influential Figures 2010”.[5] He is a member of the USA Science and Engineering Festival‘s Advisory Board. This reminds me a lot of a Zen Pencils poster from my friend Gavin Aung Than: