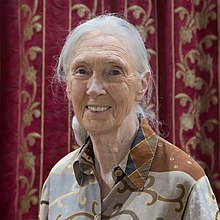 Change happens by listening and then starting a dialogue with the people who are doing something you don’t believe is right.   Jane Goodall

Dame Jane Morris Goodall, (born Valerie Jane Morris-Goodall, 3 April 1934),[3] formerly Baroness Jane van Lawick-Goodall, is an English primatologist and anthropologist.[4] Considered to be the world’s foremost expert on chimpanzees, Goodall is best known for her over 55-year study of social and family interactions of wild chimpanzees since she first went to Gombe Stream National Park in Tanzania in 1960.[5] She is the founder of the Jane Goodall Institute and the Roots & Shoots programme, and she has worked extensively on conservation and animal welfare issues. She has served on the board of the Nonhuman Rights Project since its founding in 1996.[6][7] In April 2002, she was named a UN Messenger of Peace. Dr. Goodall is also honorary member of the World Future Council.