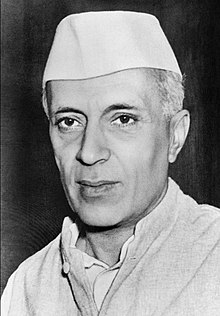 Our chief defect is that we are more given to talking about things than to doing them.   Jawaharlal Nehru

Pandit Jawaharlal Nehru (14 November 1889 – 27 May 1964) was an Indian independence activist, and subsequently, the first Prime Minister of India and a central figure in Indian politics before and after independence. He emerged as an eminent leader of the Indian independence movement under the tutelage of Mahatma Gandhi and served India as Prime Minister from its establishment as an independent nation in 1947 until his death in 1964. He has been described by the Amar Chitra Katha as the architect of India.[2] He was also known as Pandit Nehru due to his roots with the Kashmiri Pandit community while Indian children knew him as Chacha Nehru (Hindi, lit., “Uncle Nehru”)

Nehru in khaki uniform as a member of Seva Dal