The unread story is not a story; it is little black marks on wood pulp. The reader, reading it, makes it live: a live thing, a story.   Ursula K. Le Guin

Ursula Kroeber Le Guin (October 21, 1929 – January 22, 2018) was an American author. She is best known for her works of speculative fiction, including science fiction works set in her Hainish universe, and the Earthsea fantasy series. She was first published in 1959, and her literary career spanned nearly sixty years, yielding more than twenty novels and over a hundred short stories, in addition to poetry, literary criticism, translations, and children’s books. Frequently described as an author of science fiction, Le Guin has also been called a “major voice in American Letters”, and herself said she would prefer to be known as an “American novelist” 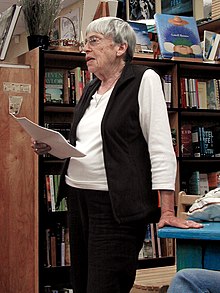