Electric communication will never be a substitute for the face of someone who with their soul encourages another person to be brave and true.   Charles Dickens

Charles John Huffam Dickens ( 7 February 1812 – 9 June 1870) was an English writer and social critic. He created some of the world’s best-known fictional characters and is regarded by many as the greatest novelist of the Victorian era.  His works enjoyed unprecedented popularity during his lifetime, and by the 20th century, critics and scholars had recognized him as a literary genius. His novels and short stories are still widely read today. 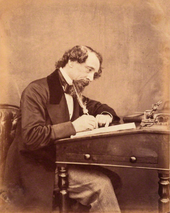 Mr. Dickens was referring to a telegram, as the first telephone call by Mr. Bell to Watson would not occur until 1876, 6 years after his death.