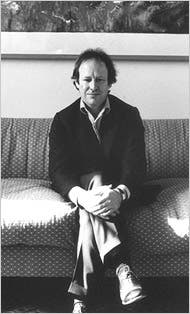 Because bankers measure their self-worth in money, and pay themselves a lot of it, they think they’re fine fellows and don’t need to explain themselves.    James Buchan

Buchan is the son of the late William Buchan, 3rd Baron Tweedsmuir, and grandson of John Buchan, 1st Baron Tweedsmuir, the Scottish novelist and diplomat. He has several brothers and sisters, including the writer Perdita Buchan. Educated at Eton and Magdalen College, Oxford, he began his career as a Financial Times correspondent, writing from the Middle East, Germany, and the United States. In 1986, he married Lady Evelyn Rose Phipps, daughter of Oswald Phipps, 4th Marquess of Normanby. She died in 2018. He has three children, Elizabeth, Nicholas and Rose.