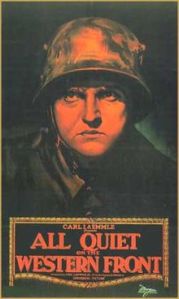 If you have never watched All Quiet on the Western Front (1930 version) go do so, but if you want a glimpse of this great movie from 1930 read this speech from the main character who returns to his old school in Germany and tells the young men who sit in the sames benches he did a short while ago.

I can’t say anything…I can’t tell you anything you don’t know. We live in the trenches out there. We fight. We try not to be killed; sometimes we are. That’s all….

I’ve been there! I know what it’s like…. I heard you in here reciting that same old stuff, making more iron men, more young heroes. You still think it’s beautiful and sweet to die for your country, don’t you? We used to think you knew. The first bombardment taught us better. It’s dirty and painful to die for your country. When it comes to dying for your country, it’s better not to die at all. There are millions out there dying for their countries, and what good is it?…You asked me to tell them how much they’re needed out there. (to the boys) He tells you, ‘Go out and die.’ Oh, but if you’ll pardon me, it’s easier to say ‘go out and die’ than it is to do it….And it’s easier to say it than to watch it happen….

It’s no use talking like this. You won’t know what I mean. Only, it’s been a long while since we enlisted out of this classroom. So long, I thought maybe the whole world had learned by this time. Only now, they’re sending babies, and they won’t last a week! I shouldn’t have come on leave. Up at the front, you’re alive or you’re dead, and that’s all. You can’t fool anybody about that very long. Up there, we know we’re lost and done for, whether we’re dead or alive. Three years we’ve had of it — four years. And every day a year, and every night a century. And our bodies are earth. And our thoughts are clay. And we sleep and eat with death. And we’re done for, because you can’t live that way and keep anything inside you. I shouldn’t have come on leave. I’ll go back tomorrow. I’ve got four days more, but I can’t stand it here! I’ll go back tomorrow. Sorry.
Here is an audio clip of the speech.

I must study politics and war that my sons may have liberty to study mathematics and philosophy.   John Adams in a letter to his wife, dated 1780

The object of war is not to die for your country but to make the other bastard die for his. -General George Patton (1885-1945)

War is an ugly thing but not the ugliest of things; the decayed and degraded state of moral and patriotic feelings which thinks that nothing is worth war is much worse. A man who has nothing for which he is willing to fight, nothing which is more important than his own personal safety, is a miserable creature and has no chance of being free unless made and kept so by the exertions of better men than himself. John Stuart Mill