Home › Outrageous Lies and Tales › The Invention Of The Boat

The Invention Of The Boat 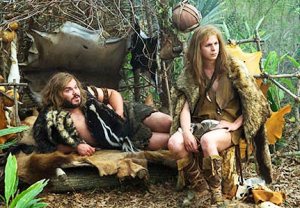 Not a picture of the characters in this story.

Once, a long long, long, I mean really long time ago there lived two cave men named Tuktuk and Gug. Now like most cavemen they were hungry. In fact it was so normal to be a hungry as a caveman they had no concept of what is was not to be hungry.

Tuktuk motioned for that they should walk around the lake and Gug shook his head no. (Shaking the head for no was very common and probably the first form of non-verbal communication the second was a child rolling its eyes at a parent.)

Gug made the sign that on that side of the lake was a Saber Tooth Tiger and had just eaten his cousin last Tuesday. (Being cavemen they did not know it was last Tuesday, but it was, so just deal with it)

Tuktuk again motioned that they should walk around the other side of the lake then. Gug now made the sign that he would not go that way because on that side of the lake his other cousin had been trampled by a herd of wooly Mammoths who were celebrating the fact that it was Thursday and they had not been eaten by a Saber tooth tiger. (Actually the Wooly Mammoths were wrong it was not Thursday but Friday, but they had still not been eaten by a Saber Tooth Tiger so no matter what day it was they were celebrating and had accidentally with no malice toward Gug’s cousin, trampled him.)

So Gug and Tuktuk sat on the side of the lake knowing they wanted to get those plums. Tuktuk grabbed some things and started throwing them at the water being frustrated and hungary, after a little while he found some of those thing were still on top of the water. (Now a light bulb would have gone off over his head, but since those things were not invented yet, it just appeared as a short burst of flame.) He motioned to Gug to look and Gug saw that things were floating on top of the water.

The two of them got together and started to experiment. (Now this was the days before anyone called it experimenting, back then it was just called trying things out.) They first just threw things into the water and some things floated. The did not realize that all the things that floated were sticks and branches. First Tuktuk took a very large branch into the lake and it floated with just his hand resting on it.

Tuktuk motioned to Gug that now they were getting somewhere. Gug not to be out down by his friend picked up a really big something and took it even further out into the water. Now Gug was much much stronger than Tuktuk, but not nearly as smart. Instead of grabbing a larger branch, he had grabbed a much, much larger rock. He took it out much further holding it above his head then he lowered it till it was just about at water level then he grunted a very loud grunt, which everyone knows is caveman for ‘Hey watch this.”.

After sputtering and splashing around Gug made it back to shore; where Tuktuk had watched the whole thing with interest. Tuktuk shook his head as Gug lying panting on the shore, a little while later Tuktuk went into the forest and brought back a whole bunch of branch, he then walked into the water holding them tight and proceeded to lie on top of them. They did float.

Gug not having learned his lesson went into the forest and came back with rocks, lots of rocks, so many rocks that he even had his pockets filled with rocks. (Pockets had actually been invented the previous Monday, but that is another story.)

Gug wadded out into the water and promptly continued to walk deeper and deeper into the water. Now he would have made it to the other side of the lake if he the lake had not dropped off suddenly and Gug did not want to take another step, and Gug felt the overwhelming, perhaps all consuming need to breath. From his previous attempt with the big rock he knew he could not and should not breathe in water, as it lead to coughing and sputtering and a desperate need to be above the water before he breathed again.

Again Gug made it back to shore and he did invent something new that day curse words which he used when talking to Tuktuk. But since no one else knew they were curse words Tuktuk’s feelings were not hurt.

By now Tuktuk realized the concept of buoyancy and the idea of displacement of water he knew he had to tie all his branches together and realized that the vine he had just tripped over would do nicely. So Tuktuk armed with this knowledge constructed the first boat, was it pretty no, was it very maneuverable, no. In fact he did not even think of the idea or propulsion, but once he finished tying all the branches together and he was sitting on top of history’s first boat. When he realized he had an extra branch. He was about the throw it overboard, when he dipped it into the water and the boat moved. Tuktuk did it again and the boat moved some more.

A few minutes later Tuktuk was on his way to get some plums. He filled his pockets with the wonderful plums and got back on his boat and paddled it back to his friend Gug.

Gug in the meantime had been busy himself; he had kept up the rock experiments, and had by the time Tuktuk returned had built a nice dock from all the rocks that he had carried out into the water. So when Tuktuk returned there was Gug standing on the dock, and he had charged Tuktuk a docking fee of three plums.