I have to admit I have a love hate relationship with this place.  I love the promise of the place, this history, the incredible potential for education.   At the same time this has been the place of so much abuse by those entrusted with the power bestowed by the people for the people by the people.

I shall keep my dark thoughts about our government out of this and concentrate on the positive, optimistic,  and affirmative.  This is no way an exhaustive list, just some of my favorites in this great city, and some hidden gems I have discovered during my numerous visits.

First off is the Smithsonian is not just one building it is 19 separate public facilities including the National Zoo.  Most people just visit the National Mall, the semi-green area encompassing the area between the Lincoln Memorial, the Washington Monument and the Capitol Building. I have walked the Mall many times and to tell you the truth the grass is kinda spotty,  if they would just put some sprinklers in water the grass at night it might be a little greener.  But along the Mall is the Smithsonian;  the Air and Space, American History, Natural History, National History of the American Indian and a host of others including ‘the Castle’ which is actually the Institution’s administrative headquarters, which contains some nice artwork in the hallways and some changing exhibits.  The cherry on top of all these museums and galleries, it is all free.  I am guessing if you spent enough time in all these museums, read all the plaques, examined all the dioramas, watched all the short films and really attempted to learn you could receive and education comparable to a liberal arts degree at a small university.

I could go on about the Smithsonian, but to do so would lead to not covering some of my other favorite gems of the city.

Something else that not a lot of people know about it the Old U.S. Postal Tower a site run the by the National Park Service located on Pennsylvania Ave almost halfway between the White House and the Capitol Building.  The observation deck is located at 270 feet with an almost 360 views of the city out large open air windows, this is in direct contrast to the small airplane sized windows on the Washington Monument at 500 foot mark.  Both are free, but with the Washington Monument you have to arrange to get tickets beforehand.  While I have enjoyed the Washington Monument, there is a wait time to get in and it is a bit crowded.  The Old U.S. Postal Tower typically has little to no waiting time and if a member of your group has a problem with height and does not want to go up, they can wait in the food court in the lower area and there are a few shops to browse in.

Next on my list is the U.S. National Holocaust Museum, while free does require a time marked pass during the busy months to not inundate the museum with too many people.  You start at the top and work you way down through history, starting in 1933 with the Nazi’s rise to power in Germany.  Let me just say this is a powerful experience, by one point in the self guided tour I just sat down and fought back tears.  When I recovered enough to continue around the corner was the shinning lights in that very dark period of the history of the human race.  The stories of the people that helped those fleeing from certain death, people like Corrie Ten  Boom, Oskar Schindler,  Ángel Sanz Briz and many many others. Those stories reminded me of the goodness that is deep in human beings.

So all these and many more things are free but what about the things that cost money, well I am not going to go into hotels and restaurants and such, because when I can I stay outside the District and come in to see the sights, there are some things worth forking over a couple of Federal Reserve Notes.  Two museums in this vein are the International Spy Museum and the Crime Museum, both cost around twenty dollars for adults.  These museums are laid out very similarly, with the Crime Museum opening in 2008 and the Spy Museum opening in 2002.   Both have interactive portions with hands on displays and activities to keep you engaged and keep you moving through.   In a city with major freebies you have to really be interested in the subject matter to fork over the money to visit these two and with limited amount of time on any vacation you have to decide if you want to spend half your day at each.  The International Spy Museum is located around the corner from Ford’s Theatre and the Crime Museum is located two blocks east of that.  But if you have a kid on your trip who would really enjoy these aspects of history it might be the highlight of his trip.

Let us cover the government buildings, that is the sole purpose of this town, that is it’s whole reason for being, to provide a place for the government of the United States of America.   The White House and the Capitol Building were built around the same time.  Both can be toured, both have heavy security, the White House much more stringent; arrangements must be made before arriving to get tours of the actual buildings.  Is it worth it?  Well as much as I love the city and have toured so much of it I have never been to the White House, I have been to the Capitol but it was a long time ago, it is inspiring and memorable, great things have been accomplished here, declarations of war and treaties, changes in laws that have recognized the civil rights of whole classes of people that before were looked upon as less than, less than everyone who was not white, less than everyone who was not male, less than everyone who had not reached a certain age.  The government in all its frailties has shown great promise and the Capitol Building has been part of it.

Getting around D.C. is easy, it is maybe the cleanest and most efficient subway systems in the nation.  I really enjoy taking the Metro, the routes are easy to read, the kiosks are simple to use and the using the website before hand to plan out your trip is very helpful.  Not only does the website tell you what is located close to each stop it gives you helpful hints, like going to the National Zoo get off at the Cleveland Park Station because if you get off at the Woodley Park station you will have to walk uphill to the zoo.  Another great thing about the Metro, when you are standing on the platform there are changing digital signs which tell you how long your wait will be.

The final area I want to cover is the memorials to remember greatness, weather it be great men that made individual achievements, like Washington, Jefferson, Lincoln or the newest FDR.  Or weather it is memorials to whole groups of men and women like those that gave their last full measure in times of conflict, such as the Vietnam, World War II, Korea, or the garden of stone across the river that is Arlington.  These are places that inspire great reverence for me.  It is the nation showing honor to people that devoted themselves to the notion, the ideals, the principles, and their beliefs that this country had something good to offer the world.  Arlington National Cemetery is  a place of quiet remembrance, the nation has devoted space to those that have fallen both in war and in peace time.  Many of them died believing that this country was founded on a promise that no man should have to bow to another because of simple luck of birth, that human beings are inherently equal and worth something just because they are human beings.

I encourage every American, heck I encourage every human being regardless of nationality to visit D.C. and see that promise of the Great Experiment in Freedom that is America.  Explore this place, stop and look at amazing monuments that are scattered throughout the city and learn, then learn some more. 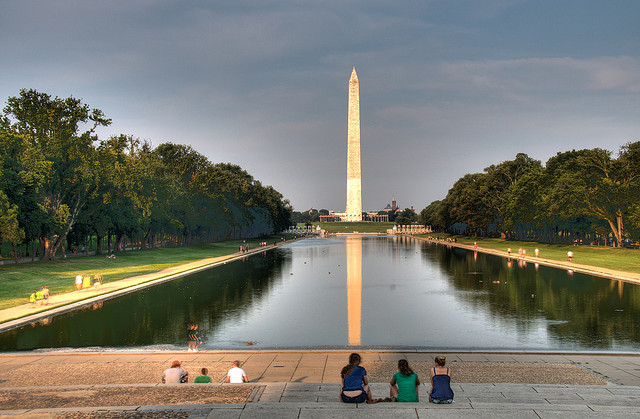