Do you the magnificent thing about America?  The promise that anyone can be anything is actually true.

Charles B. Brown, III was a business man who developed the Gas-Lite Manufacturing Co of Pittsburgh, still one of the largest makers of sand-cast aluminum fixtures in the United States.  Nicknamed “Make a Buck Chuck” when he was a kid, this third generation immigrant (his grandfather came from Germany) invested in real estate and made wise banking decisions (he was the largest shareholder in the Allegheny Valley Bank).

Eccentric is which is a fancy way to describe a rich odd person, two labels easily applied to the owner of The Bayernhof.  He only wore blue shirts (he owned 238 identical button up shirts from Brooks Brothers) he entrusted his house to be designed by teenage neighbor who had never built a house before so there are no blueprints of the building and he told outrageous personal stories (lies) that he was able to get away with for years. (Fortunately for him this was in the days before Google on every cell phone.)  What did this lifelong bachelor do with all his money he made in his life? (Besides $3,000 plus in various denominations he left scattered on top of wardrobe when he died in 1999.)  Mr. Brown filled his home with fun and amazing things that he adored; depictions of life in Germany, a world renown collection of wonderful musical machines, surprises and most of all comfort (nine wet bars throughout the house).  All accounts credit him with being a good friend, a wonderful host, and a bit of a jokester.  Mr. Charles B. Brown the Third was a full blown eccentric person.

The Bayernhof Museum sits on a hill overlooking the the Allegheny river a couple hundred above but adjacent to Pa Route 28.  The title museum invokes images of boring items displayed behind glass with small cards explaining what you are seeing and why you should care.  Charlie B. Brown’s house is a world class museum with rarity’s and one of kind items but it is anything but tedious.  The home and its amazing collection was left in a trust after Mr. Brown’s death to be managed by his friends.  The intention was to allow people to enjoy it like Charlie enjoyed it and overall it feels like the owner has just slipped away into another part of the house.  Even with an indoor swimming pool, six bedrooms, a dedicated poker room and billiards room, its own observatory with 16 inch reflector telescope and the entire southern facing wall consisting of floor to ceiling windows looking out over the river valley it still feels like a lived in welcoming home.  While taking a tour it felt as if you could sit down at the kitchen table put your feet up and have a mug, stein or glass of your favorite beverage, adult or otherwise, while enjoying something from the kitchen (one of three in the house) with all the modern conveniences of the 1980’s.

I think the kitchen might have been the only room in the house without some sort of large automatic music box.  The rest of the house is chock-full of player pianos, automatic pipe organs and other mechanical (hand cranked and electric)  wonders that play music from around the world.  Charlie invested several several million dollars in a collection of musical devices even though his friends said he could not carry a tune in bucket.  My favorite device would have to have been the combination player piano, with not one but two self playing violins, or the Victrola hiding in the lamp shade or maybe the one with the birds.

Charlie Brown III was a bit of tricky fellow and he had several secret passages and hidden doors in his house that would allow him to slip away from crowds of people during parties and reappear in other parts of the house.  His wine cellar is accessed thru one such door via his cave (I will get back to the cave in a second).  The wine cellar is beautiful an organic type design with a tree stumps making up the centrally placed table in the room with the native rocks from the property making up the floor.  Displayed in the room is a still used to make moonshine from a bygone era.  But what caught my attention (and other adults on the tour) was the wine itself.  I never saw Mr. Brown’s bank statement but I am sure that he could afford more than screw off caps and Mad Dog 20/20, but our guide assured us that is what Mr. Brown stocked.  (Myself I believe this was another joke by Mr. Brown, if I had been ushered into this gorgeous room by him I would automatically think it held nothing but the best from wineries in Europe and California, not something that I drank as a Private in the National Guard because it was cheap and fit into a ammo can.)  I did not see any wine in cardboard boxes but they did not become very popular until the mid-80s so maybe Mr. Brown did not know much about them.

The cave, for those of grew up in the Pittsburgh area, made me feel I was back in Noah’s Ark in Kennywood with fake stalactites and stalagmites made up of sprayed concrete and fiberglass. (Remember the ones hanging from the ceiling hang on Tite).  Mr. Brown’s whimsical side comes out here as well with a miniature panda ranch and other wonderful hidden items that no home cave should be without.

The tour I took was with a Boy Scout troop, so there might have been some features that were omitted or glossed over for the teenagers but it was a impressive tour that I fully enjoyed and highly recommend to anyone and everyone.  Charlie B. Brown III is my kind of hero, a hard-working, loyal, nice guy who enjoyed a good time but did not take himself too seriously.

Tours are by appointment only, with groups no larger then twelve, the house is not wheel chair accessible or a place that anyone under the age of ten would enjoy due to a lot of talking and listening to the music devices on the two hour tour. You are directed to sit at some parts of the tour in some very comfortable chairs so it is not to tiring.  Photography is not discouraged but the tour moves along at a steady pace with a tour guide and a assistant bringing up the rear of the group.  The cost is only ten dollars a person so a good value any day of the week. 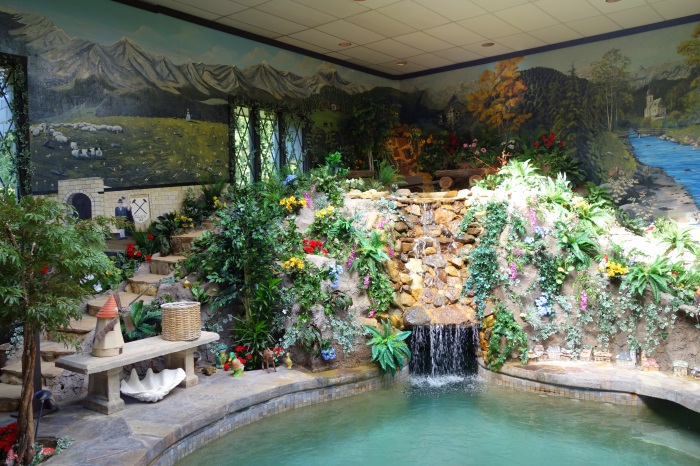