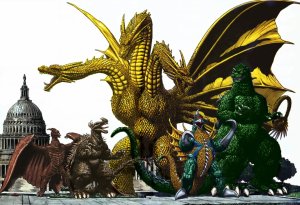 “We need our own monster.”

“But just a monster that protects the perimeter of our farm, and he should be restrained at all times.”

The older man just nodded thoughtfully and rocked in his chair.

“So it is agreed we get our own monster, but with strong chains, and we don’t feed him much so he won’t get very big and we keep him along the edge of the property.”

Several weeks later they had their monster.   The younger man claimed this was a brand new type of monster, not like one all their neighbors had, this one was more obedient,  would only go after the pests and nuisances that the monster was instructed too.

One evening while sitting on the porch the old man watched the monster chase a pest all the way up to the barn, he pointed out that the monster was off his chain.

“Yeah I know the chain slowed him down too much, but look he went right back to where he needed to be, I don’t think we need the chain on him all the time, maybe just when we go to bed at night. “

Several weeks later the older man mentioned that the monster was getting a little bigger.

“Well he was a little slow just on what he could forage and those pests on the western side of the garden were keeping the crops from growing, so I upped his food,  now instead of him foraging all the time he can deal with those annoyances.”

The older man squinted his eyes and looked at the western edge of the property straining to see the problem.  Sure there were problems out there but with the proper fencing and such it would sort itself out he thought.  But the younger fellow seemed so eager to have get a handle it he let him use the monster the way he saw fit.

The harvest season came and the homestead was blessed with an abundance.  The old man came out in the morning and saw that the younger man had the monster harnessed to the wagon as if to pull it to town.

“I figured that the monster could take the wagon into town, everyone would see how big and scary he is and he would not just be out here lurking around doing one thing.”

The older man reminded him that the horses  had always done just fine pulling the the wagon before.

“Oh they could use the day off besides the monster can pull just as much as them. “

The old man watched his young partner go off into town and slowly shook his head.

Winter came and one bitterly cold morning the old man walked into the barn and found the young man feeding the monster in the barn well the old man frowned and pointed for the monster to leave which the monster did but he did not go too far away, not all the way to the edge of the property as he had been trained to do.

The younger men pled his case.  “It is silly for our monster to be out in the cold, all our livestock are in the barn for the winter if the monster is outside and they are in here he might as well be in here too protecting them.

The old man was adamant that the proper place for the monster was along the perimeter watching over things and if he was in the barn he would start eating the food of their livestock instead of foraging for himself as he was supposed to, the old man was adamant and enforced the rule as much as he could but he often found tracks were the monster had come into the barn.

Then the older man broke his leg just as they were beginning the spring planting and was confined to his bed for several weeks.  The older man now got around much slower on crutches and that is when he discovered the monster had grown considerably.  He also realized the young man had gotten rid of the horses and was using the monster for all the chores around the farm.

The summer passed and the old man noted that the farm was running efficiently but the monster seemed to be growing more and more.  He also  took stock of the fields and it looked like their harvest was not going to be as good as last year because something was eating the plants in their early stages, he pointed this out to the younger man.

“Well you see when I started having the monster doing all those extra chores he would get hungrier and now I have feed him but he just seems to be hungry all the time now.”  The young man said nervously.

The old man glared at the young man but inwardly he was angry with himself too.

Early the next day the old man spoke.   “We needed a monster.  We still need a monster.”   “But we” he motioned to the young man and himself. “We grew lax.  We came to depend on it for too much.  The steps toward this problem were both slow and gradual but with each concession to the rules the monster grew.  Now in order to reign it in it is going to be both difficult and dangerous.  Difficult because we have gotten lazy letting the monster do things that we should have been doing.  Dangerous because it has grown so big and now it is used to doing whatever it want when it wants.”

The younger man nodded thoughtfully rolled up his sleeves and they went out together to deal with the monster.

Artwork at the top of the page is from Mr. Arthur Adams a great artist.

This article was written for Libertarians and Pacifistic Anarchists to share with people to make them think.  Just please give me credit or a link back to my site.

Here is me reading it.

If you liked this you might want to read Americas Big Game (good for any election cycle).  Or Salesmanship.

This story was broadcast on The Survival Podcast on 7/7/2016 at about the 1:08:30 mark.  I am quite honored that the host, Jack Spirko, played it on the same day he played clips from the movie John Adams from HBO, both John Adams words  urging the vote for Treason/Rebellion/Independence and the reading of the Declaration of Independence.

One thought on “We Need a Monster”