The human relationship to combustion is as mysterious as it is fraught with madness. From the candle flame to the nuclear blast, it has lit up the human imagination with fear and fascination.    Michael Leunig

Michael Leunig (born 2 June 1945), typically referred to as Leunig (his signature on his cartoons), is an Australian cartoonist, poet and cultural commentator. His best known works include The Adventures of Vasco Pyjama and the Curly Flats series. He was declared an Australian Living Treasure by the National Trust of Australia in 1999. 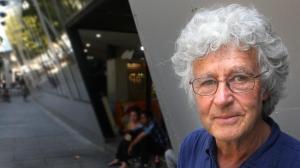