I was on the 3rd day of a solo vacation, location Ticonderoga, New York located on the northern end of Lake George.  After a night at a local campground I head towards the French and Indian War fort on the southern end of Lake Champlain.  It is early, so I do what I normally do when what I am going to is not open, I  wander.  My meandering takes me to the Walmart for a few supplies and then I head downtown.  I am always looking for a comic books,  gun shops,  2nd hand stores, just kind of open to the universe and what may be around the next corner.

That is when I see some very distinct letters, gold in color on the side of building, Star Trek Original Series Set Tour, I pull in.  The building appears to have once been a store, possibly a small mom and pop grocery store in downtown Ticonderoga.   The sign on the door informs me it will not be open for a couple of hours.  I decide to stick with my original plan, see the fort first and then come back here.

The fort is very enjoyable, I  have a great talk with a reenactor who was lawyer but decided to give it up to do something he truly enjoys, that conversation lasted a  good twenty minutes while he cobbled together some hand made shoes for other reenactors.  The rest of the tour is interesting and educational, along the way I talked to a couple of people, another reenactor, the guy running the gift shop, I asked them about the Star Trek thing downtown, neither of them know much about it, except the fact that William Shatner was at it a couple of weeks ago.  Promising I think, maybe it is something more than just a few relics from the original show in glass cases with the theme music playing in the background.

I drive back downtown and park right out front.  It’s a Thursday in May, not the height of the tourist season yet so emptiness is to be expected.  I go in, pay the $22.50 for a ticket from a nice lady behind the counter and look at some items in the display cases while another tour of three people finish up.

Then it is just me and my tour guide (sorry I do not remember your name, and you never sent me an e-mail for those free download codes that I promised you.)  He is younger than me, very energetic and extremely knowledgeable.  He leads me to a double set of wooden sliding doors, I kinda feel like I am about to enter someone’s bedroom from inside of their walk in closet.  He pulls a string to open the doors and we walk in.

Do you know that feeling you get when you see that beginning credits for a long awaited Marvel movie,  or when Lucy walks thru the wardrobe and finds herself in Narnia, maybe if everything is just right on a summer day and you open a comic book after the cover has been burrowing into your mind all the way home.   That is how walking into this meticulously rebuilt set of the U.S.S. Enterprise NCC-1701 made me feel, like I was transported to a place I had always dreamed about but never really believed I could get to.

I am a Trekker, I grew up on the re-runs, the adventures of Kirk, Spock and McCoy ignited my love for all things sci-fi, this was a couple of years before Luke, Han and Leia came along. (sorry George, Gene got there first.)   I daydreamed about being Captain Kirk’s nephew  at least a decade before Wesley Crusher moved onto the NCC-1701-D.

The first room on the tour is the Transporter Room, the gateway to all adventures off the ship, the place where trouble started, trouble ended, or stories took a dramatic turn.   If you were going to have a face to face with your enemies or your allies this where it happened.  By the time I got halfway thru the tour,   I admitted to the tour guide, that if I would have known how great the tour was I would have paid double. 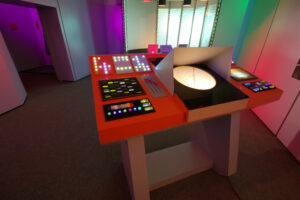 The rest of the tour is was as great as the first part, Kirk’s quarters, the Jeffery Tube, the Engine Room, and finally the wonderful, the fantastic, the place that every Trek fan would love to have duplicated in their own home, The Bridge.  I got to sit in Kirk’s chair, I got to look over all the buttons at Spock’s station, I got to examine Sulu’s console.  They even have the background noises playing as if operations were ongoing and the crew just stepped away for a second.

The only flaw I could see, and it is not really a flaw, is no ceiling.  This was the rebuilt set and they had to light the sets from above so that is to be excused and ignored.  Although I was told by my guide that they are thinking of putting a ceiling on the bridge because in one episode it was shown, so that is cool.

The big question you have to ask yourself when traveling, ‘would you go back again?’   This is different for different people and you have to weigh out your priorities when it comes to travel.  I love to travel and my goal is to see different things, new places,  and have diverse experiences .  Given the choice to go back and see things a second time versus seeing something I have never seen before I would most likely default to seeing the new thing.  There is something to be said to exploring a place fully of course,  I have been to Disney, Gettysburg, the Grand Canyon and Washington numerous times and I will go back to them at the drop of a tribble.  Other places like Hawaii, Las Vegas, Hershey, New York City, the Outer Banks I could go back to but it would not be high on my list.

The Star Trek Original Series Tour is a place I would go back to in a heart beat.  Probably not alone, I want to go back with my brothers who were right there with me on the floor watching that big old box set in the basement as Kirk fought the Klingons with a sword.  I want to go back with my buddy Scott who has talked to me for countless hours about science fiction and comic books.  I want to go back  with my daughter who has never watched an episode of Star Trek, but the tour brought me so much joy that she would probably enjoy it by osmosis.

The area around Lake George is gorgeous, majestic mountains and I would love to spend time on the lake, and Vermont is just a very short ferry ride away.  (Travel tip for the ferry:  If you go on a windy day, the water will be choppy and the ride across is a little rough and kind of fun.) There are countless little hotels, cabins for rent and campgrounds in the area and the summer weather is beautiful.

Oh and before I forget, they let you turn on the Red Alert from just about anywhere on the ship, I did it three times.