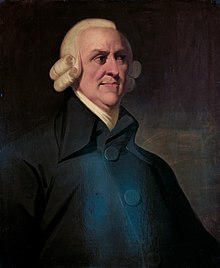 The real tragedy of the poor is the poverty of their aspirations.   Adam Smith

Adam Smith FRSA (16 June [O.S. 5 June] 1723[3] – 17 July 1790) was a Scottish economist, philosopher and author as well as a moral philosopher, a pioneer of political economy and a key figure during the Scottish Enlightenment.[4] Smith wrote two classic works, The Theory of Moral Sentiments (1759) and An Inquiry into the Nature and Causes of the Wealth of Nations(1776). The latter, often abbreviated as The Wealth of Nations, is considered his magnum opus and the first modern work of economics.