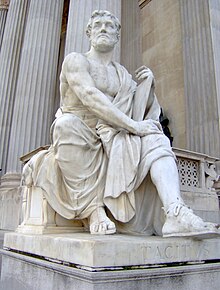 Truth is confirmed by inspection and delay;  falsehood by haste and uncertainty.   Tacitus

Publius (or Gaius) Cornelius Tacitus (56 – 120 AD) was a senator and a historian of the Roman Empire. The surviving portions of his two major works—the Annals and the Histories—examine the reigns of the emperors Tiberius, Claudius, Nero, and those who reigned in the Year of the Four Emperors (69 AD). These two works span the history of the Roman Empire from the death of Augustus, in 14 AD, to the years of the First Jewish–Roman War, in 70 AD. There are substantial lacunae in the surviving texts, including a gap in the Annals that is four books long.