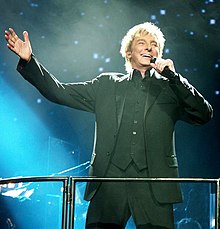 Barry Manilow (born Barry Alan Pincus, June 17, 1943) is an American singer-songwriter, arranger, musician and producer with a career that has spanned more than 50 years. His hit recordings include “Could It Be Magic“, “Mandy“, “I Write the Songs” “Can’t Smile Without You“, and “Copacabana (At the Copa)“.

Tags: A. A. Forringer, among, barry manilow, misfits, Qoutes