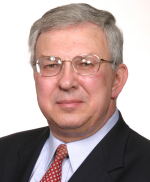 Everything we do is designed, whether we’re producing a magazine, a website, or a bridge. Design is really the creative invention that designs everything.  Henry Petroski

Henry Petroski (February 6, 1942) is an American engineer specializing in failure analysis. A professor both of civil engineering and history at Duke University, he is also a prolific author. Petroski has written over a dozen books – beginning with To Engineer is Human: The Role of Failure in Successful Design (1985) and including a number of titles detailing the industrial design history of common, everyday objects, such as pencils, paper clips, and silverware. His first book was made into the film When Engineering Fails. He is a frequent lecturer and a columnist for the magazines American Scientist and Prism.