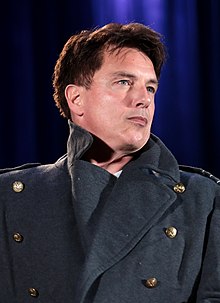 I was the one who taught my sister and my niece how to walk in high heels.   John Barrowman

John Scot Barrowman MBE (born 11 March 1967) is a British-American actor, singer, presenter, author, and comic book writer. Born in Glasgow, Barrowman moved to the U.S. with his family in 1975. Encouraged by his high school teachers, he studied performing arts at the United States International University in San Diego before landing the role of Billy Crocker in Cole Porter‘s Anything Goes in London‘s West End. Since his debut, he has played lead roles in various musicals both in the West End and on Broadway, including Miss Saigon, The Phantom of the Opera, Sunset Boulevard, and Matador. After appearing in Sam Mendes‘ production of The Fix, he was nominated for the 1998 Laurence Olivier Award for Best Actor in a Musical and, in the early 2000s, returned to the role of Billy Crocker in the revival of Anything Goes. His most recent West End credit was in the 2009 production of La Cage aux Folles.