I love to sit in the lobby of Walt Disney World Wilderness Lodge, to me it is one of the best places in the world to sit and watch people, take a short snooze, read or a pleasant combination of all three.

Let me set up the scene, the place looks like a giant log cabin, the term grandeur comes to mind but logs cabins and grandeur do not seem to go together. Perhaps fantastic, majestic or resplendent are better suited to the feelings I have for this interior space. At the same time I feel warmth and comfort which does not usually match up to large closed in spaces. Having been in a number of covered stadiums, warehouses and other large closed in spaces warmth never comes across. Seven stories tall, with an 80 foot fireplace made of stone, wood everywhere (remember I said it was a log cabin). Maybe it is the wood or the perfect mixture of all the elements or maybe just my state of mind but it is an almost perfect man made space. I have stayed at the Wilderness Lodge three times and I feel a sense of wonder every time I walk into the lobby.

Like I said my favorite thing to do there is to watch people, and who are my favorite people to watch, new arrivals, especially people who are experiencing the lobby for the first time.
A word about people watching. I consider myself a semi-pro at it. I enjoyed watching people as a kid I loved guessing about such things as which car people were walking to in a parking lot. Then I joined the ranks of law enforcement and was trained in observing body language, eye movement and distance between persons. Coupling the training, with the hobby of watching people, and the final ingredient of wanting to tell stories about them it can provide hours of fun. Say you have a guy standing around, is he waiting for someone, is he impatient, does he want to see the person, how will he greet them when they show up, a kiss, a hug, a look at his watch to see how late they are? One thing I try and do when watching them is give them a name, nothing complex, maybe Dad in the Vacation Hat, Mom Who Needs A Glass of Wine, or Little Sister Whose Phone Is Dead And Is So Bored.

I would have loved to have a picture of me when I first walked into the lobby, but I can look for that expression on other people. I caught a glimpse of it once while sitting on a perfectly situated couch near the front door. I was doing some reading and people watching when a family came in, Mom, Dad, Older Brother and Little Brother. Mom and Dad went directly to the registration desk intent on getting important things done, Older Brother followed along engrossed in his Gameboy. Meanwhile Little Brother walked in, bringing up the rear of the family unit; he stepped into the lobby and stopped and started looking around, the grin on his face grew until it was painful to look at, fearing he would hurt his face. Little Brother’s eyes got big as he struggled to take in the whole place. He stood in the in the middle of the doorway, and I am glad no one was coming thru the door after him because they would have interrupted the pure delight he had in viewing his surroundings.

It is even greater when more than two or more members of a family or group gets struck with the awesomeness of the place at the same time. You see them turn to each other and start to point out things, like the chandeliers which looks like Native American Teepees,

or the small sculpted woodland animals on recessed shelves at the Front Desk, or the two seven story tall totem poles. But like most Disney things there are more than meets the eye, the rock layers in the fireplace replicate the layers in the Grand Canyon. There are so many little touches in the Wilderness Lodge that Disney gives tours on a regular basis to help you learn about them.

Did I mention the music, well it is not typical Disney music, no African mammals singing “no worries”, no tropical fish singing about living under the ocean, and no English nanny extolling the virtues of the end product of cane farming when added to a medicinal product. No this music is from Hollywood soundtracks, large orchestral pieces about the American wilderness experience from movies like Silverado, Wyatt Earp, The Last of the Mohicans, of Mice and Men, and John Williams theme for Earth Day. I asked in the gift shop if they had the music they play in the lobby on CD and they said no, but they did have a list that they give out. If you want to get a feel for the music you can use the Pandora app on a smart phone and in the search engine type in “The Sons of Katie Elder” and it will give you a similar mixture (minus The Good, the Bad and the Ugly Theme which pops up from time to time.)

The furniture is nothing fantastic, just your regular hotel lobby fixtures, couches, rocking chairs, end tables, easy chairs and coffee tables all with a western motif in fitting with the rest of the lobby, but there are plenty of them and they are comfortable enough to spend a couple of hours in if you have the time to spare. There are other places to sit and indulge yourself, chairs are placed around the upper rails surrounding giving you an raised views of the lobby and the other is the Whispering Canyon Café. The Whispering Canyon is a family style sit down restaurant with a rowdy staff who lead children around the tables for impromptu horse races and other Disney mandated shenanigans. You are a little higher off the floor and opposite the Front Desk. If you are looking to not be interrupted well this is not the place, but it does have one feature that makes up for any interruption, all you care to enjoy, bottomless, refillable MILKSHAKES, of which you can switch between Chocolate, Vanilla and Strawberry.

On the other hand if you do not want to watch people closely and want some relative quiet but want to say inside but out of your room there is a small fireplace and seating area directly above the main doors, you do not have to see people and hardly anyone wanders through.

Little and big items enrich the place; the hot springs which bubbles up from the floor and starts a small stream which ends outside in the pool area; the character totem pole outside of the gift shop (which according to Native American culture, the lowest position on the pole is the most important with the top being the least, so Humphrey the Bear the is the most important, followed by Donald Duck, then Goofy and finally Mickey Mouse; or the dozens of Hidden Mickeys scattered about the place (some even in the light fixtures).

I will end with the fact that everyone I know that has been in this lobby loves it. There is a quote I dearly love, that sums up the appeal of the Walt Disney World Wilderness Lodge and how it is a place where dreams come to life, like a lot of the Walt Disney parks.

All America lies at the end of the wilderness road, and our past is not a dead past, but still lives in us. Our forefathers had civilization inside themselves, the wild outside. We live in the civilization they created, but within us the wilderness still lingers. What they dreamed, we live, and what they lived, we dream. T.K. Whipple 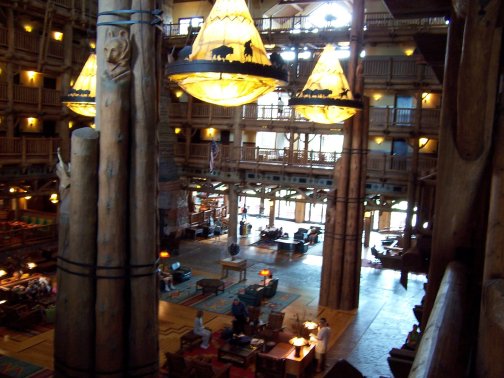