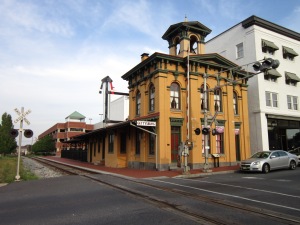 The rolling green hills of Pennsylvania farm land was the sight of one of the most epic battles in history.  Like all the history books say this quiet little town was of no  strategic or tactical significance but it will live on in history like many other famous places of battle; Pearl Harbor, Normandy, Waterloo, and Agincourt.

If you are going to Gettysburg for something other than history I would be really interested to know what that is, because as far as I have seen, except for the business that support people who live there the only other enterprises are the Gettysburg College and agriculture.

My father was in the telephone business and my family once spent a long weekend at Gettysburg College staying in the dorm rooms for a Telephone Pioneers convention (an organization that helps deaf and other handicapped persons  out with telecommunication needs).  I remember It was hot, my brothers and I had a dorm room to ourselves and we rode on a steam powered train one afternoon and we toured the battlefield and I saw the cyclorama.   That is one of my earliest memories of going to Gettysburg.  I went there again when I was a teenager with my Boy Scout Troop and my most vivid memory of that was climbing around Devil’s Den on the rocks and wondering what it was like to get shot while in those massive rocks.

If you are like most people you have no idea what a cyclorama is, well it was the movies before their were movies.  They are huge circular paintings that you stand inside of and they are typically of battle scenes although there are some of other historical events.  The first one opened in 1787 and there was one point in America that every major city had a building set aside just to display them.  The cyclorama at Gettysburg is in the new visitors center, moved there in 2008 after being in the old visitors center from 1945 until it closed in 2005.  What does the Gettysburg Cyclorama show, Pickett’s Charge, also known as the High Water Mark of the Civil War.  It shows the battlefield as it might have looked on the hot, humid 3rd of July 1863.  Cannons with smoking barrels, generals directing soldiers into the fray and wounded being helped off the field, and the artist, because he painted himself into the picture looking over the battlefield. 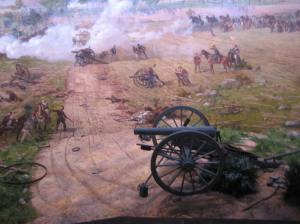 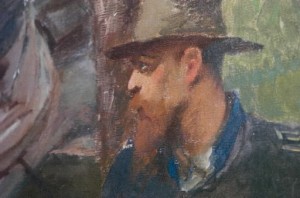 I remember the old presentation, and I have been to the new presentation a couple of times, and I liked the old one better, the Park Rangers did a dramatic reading, the lights flashed on certain areas of the painting and I think there was a stirring musical score to go with it.  In the current presentation you are at eye level with the painting, which is better, before you were below it, there are props and roads built in a diorama fashion drawing you deeper into the painting but now all you get is a question and answer period, a brochure with notes and diagrams in it and a limited time before the next group comes in.

While I miss the old presentation, I love the new visitors center, it is easier to navigate, more spacious and incredibly up to date and you don’t feel as though you are risking your life  either by being trample in the parking lot or by crossing the road to the get to the National Cemetery.  I am sure the tour bus driver’s enjoy the new location as well for the drop off circle. 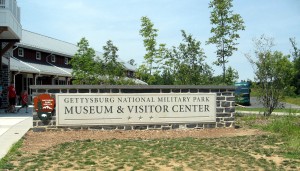 To get away from the Gettysburg National Park you can take a stroll through down town, this does not get you away from the history of course because the battle raged all through the town and surrounding country side.  But the down town area is a nice place for a stroll and also contains two of my favorite restaurants in the area.  The Pub & Restaurant right in Lincoln Square which serves good American standard fare and has a nice atmosphere, if you grab a window seat you can watch cars navigating the traffic circle that drives most Americans a little crazy. 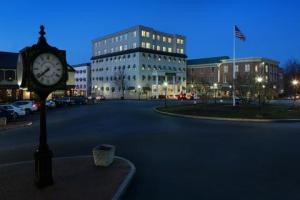 The other restaurant is a little bit harder to find, and has a shorter menu but to me it makes up for these shortcomings.  The Farnsworth House Inn located at 401 Baltimore Street, this is where the Confederate  sniper was located that took the life of Jennie Wade who was home baking bread (not intentional, the bullet went through two wooded doors before it struck her), the walls have over a 100 bullets hole and more recently this is where the cast from the movie Gettysburg came to drink at the Sweeny’s Tavern after a day of shooting scenes.  The place has a American Colonial food menu (Chicken Pot Pie) and props and costumes that the cast gave to the Tavern upon wrapping up the movie.  The Farnsworth house also has a bed and breakfast and hosts a ghost tour at night. 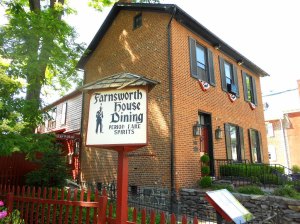 I have been to Gettysburg numerous times in different parts of the year.  My family once met up with friends and we spent the Thanksgiving holiday weekend here, first watching the holiday parade followed with my first meal  at the Pub and Restaurant in Lincoln Square and my daughter being about five and excited about Christmas found a man with a great big white beard and began talking to him about Christmas, he talked to her in the most engaging manner, and I apologized to his wife, but she insisted he loved the Christmas season for this very reason.

If you had no interest in history but just wanted to ride around some pretty countryside on a bike you could do worse, most of the battlefield roads are limited to twenty-five miles an hour and there are lots of walking trails.  But like I said earlier, there is not much else to do in the town that is not in someway connected with the battle. Perhaps you can go to the Eisenhower Farm where the President retired to, or the Hall of Presidents and First Ladies, but again these are all history related attractions.

One small gem that most people miss is the Rupp House, home of the Friends of Gettysburg Society, it is just down the street from the Farnsworth House (451 Baltimore Street) and it has some nice hands on displays about civilian life during the battle.  It also shows some pictures of the efforts to return the Battlefield to its look of 1863, like the before and after pictures of the removal of the telephone poles from the Battlefield.

Gettysburg is for history buffs, and history nerds revel in the place, you can’t swing a dead cat in town without hitting a historical building, marker or placard.   Weather it be the military aspects, or the human interest stories that abound.  I find it hard to believe that any other place in the world has as much written about or as documented and studied as this Pennsylvania town for only a seventy-two hour period.

One of the most interesting contrasting statues on the battlefield is two on the Confederate side, Lee the commanding general has a massive monument facing towards the Union side, while his right hand man, the man he called “My Old War Horse”, is given a small statue, directly on the ground in a grove of trees off the main road.  James Longstreet became almost pariah in the south because he took a job with the Federal government after the war while Lee became an almost mystical father figure of the entire South.  Longstreet did not get his statue until 1998, Lee riding his horse atop the Virginia monument has been there since 1917. 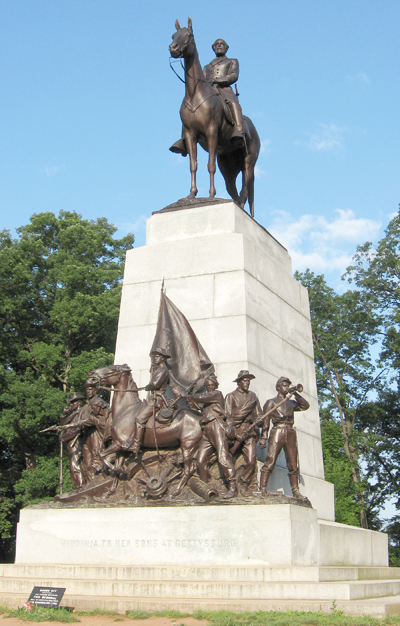 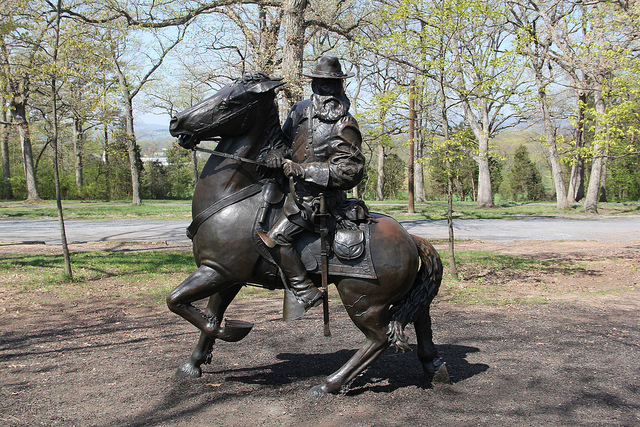 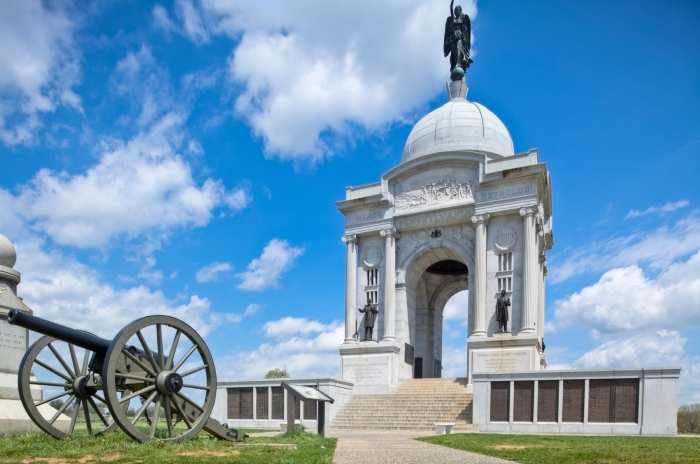 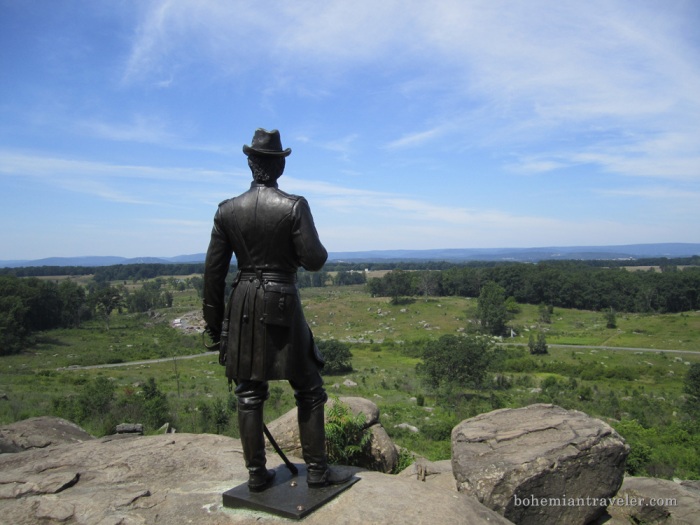 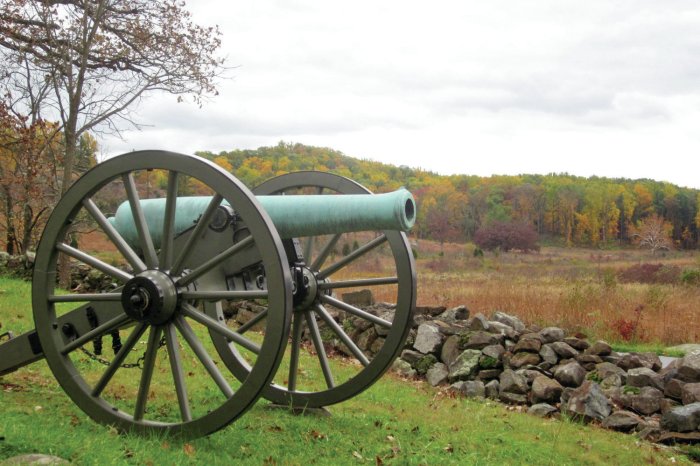