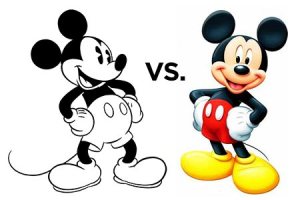 I am a bit of Disney Geek, in the Age of the Geek where does a Disney Geek (DG) fall into the hierarchy of Geekdom?  Where does DG rank on the pecking order in the geek world; higher or lower than Trekies, Browncoats, Star Wars Fans.  How about Boys of the Dwarf, Whovians or Bronies.

But we are here to discuss Disney World versus Disneyland.  I first visited the World in the late 70’s as a kid, back then it was only the Magic Kingdom, EPCOT was in the planning stages and the E Ticket system still existed. (My memory is we chose Pirates of the Caribbean over Jungle Cruise.)  Animal Kingdom and Disney Studios were maybe bouncing around in some Imagineers heads but that was as concrete as they got.

As an adult I have been to the World numerous times seeing all the parks each time, staying on the property four out of those five times. I enjoy Disney not only for the rides, shows and the stories they represent but for the wonderful atmosphere created by the attention to cleanness, service and comfort.   (The Disney Company does have issues, but they do provide a product people want.)

I just returned from California where I had the great experience of visiting the original park, the magical land that Walt Disney himself actually participated in, he entertained there, he slept there and personally had a hand in keeping the parks running by doing spot checks incognito.  I think every DG no matter how many times they visit the other parks around the world still consider it a right of passage to visit the original in Anaheim.

My first impression of the Land it is just as magical as the World.  The attention to detail, the cleanliness the setup, the cast members attitude and of course the rides.  My priority when I arrived was to experience what I could not at the World and what was original to the Land.  First stop, the Indiana Jones Adventure: Temple of the Forbidden Eye, then on to Pirates of the Caribbean (a bit different from the ride in the World), the Matterhorn
followed

by a short stop in Mickey’s Toontown for a picture with Mr. M. Mouse.   Unfortunately Space Mountain, The Haunted Mansion and The Disney Railroad were closed due to construction and decorating for Halloween.  (Along the way my daughter and I noted the first time Disney Visitors who had already made purchases they would have to tote around all day, we both commented “Amateurs”, there is always time to buy items at any Disney Park.)

One thing I noticed that was pleasant in the Land is not every ride deposited you into a gift shop, unlike the World where as soon as you walk off a ride you are blitzed with stuffed characters, souvenir mugs and ride themed knick-knacks.

Since I was not partaking in all of the rides I had time to slip over to Disney’s California Adventure Park and enjoy Soarin, the Cars themed land and walking on Paradise Pier. (I had been to the Santa Monica Pier the day before, it was cooler and parking was cheaper.)  I did not do any research before hitting California Adventure, no plan so I  just enjoyed the great things my daughter picked out for us to do. I  appreciated the park and it was great not having a plan and “have to” see things.  I even got to do a little bit with some street performers.  (Had video of my playing a pink tambourine with some Green Army Men from Toy Story but the resolution was low and readers of aaforringer.com always get the highest quality, so no video today.)

One thing I love about Disney World is the Monorail, it captured my imagination when I was a kid and ride it every time I visit a park, I even have ridden in the front compartment which unfortunately was stopped in 2005.  Riding on the Land’s Monorail was okay, it is a short ride (only 2.5 miles of

track vs. 14.5 in the World) The ride is a way to move from the park to the adjacent hotels, but it is primarily an attraction and the first monorail in the United States.  My suggestion though is do not ride it, you don’t see that much of the park and the illusion is actually broken because you see outside of the park, the real world as it is, no Disney Magic lens just Plexiglas looking at Mimi’s Café and the Bus stop for the Manchester/Harbor 460 Line Bus Stop.

Of course all Disney Geeks will know that it is one of the biggest regrets of Walt Disney of not having enough land around his first park. The biggest reason that the World exist is Walt did not want the neon/cheap/touristy/crowded phenomena that occurred outside of the Land so he bought 43 square miles as opposed to the Land which is only .13 square miles.  The Magic Kingdom in the Word (which is basically the Land reproduced in Florida) is .22 square miles, so even if the Walt Disney Corp. had stopped there they would have doubled the size of Walt’s original dream.

I really delighted in my visit to Disneyland; anytime I can experience exceptional service, PG rated adventure that reinforces great stories and in an environment I can relax in I am all in.  As a DG any visits brings wishful thinking.  Ideas that maybe/possibly/hopefully/optimistically would make the Parks even better.

Here are my suggestions Disney:

Update most of your Dark House rides. For those unfamiliar with the term you ride in a vehicle with up to four people touring what is essentially scenes from one of Disney’s movies, such as Cinderella, Pinocchio, Alice in Wonderland and the fan favorite Mr. Toad’s Wild Ride.  These are fun and all and had long lines but the only updates I have ever noted is the Winnie the Pooh ride which is better lit and with some 3D characters.  Technology has come a long way since the 50’s with plywood cutouts and synchronized lighting so get with the times Disney and allow the Imagineers to do a remodel.

Secondly, why is not every ride they have at the Land reproduced somewhere in the World, it is not like they don’t still have room for expansion.  Disney could add the Indiana Jones ride next door to the Indiana Stunt Show in Disney’s Hollywood Studio.  They should also add the Cars Land to the back part of the Studios and you could walk thru the town of Radiator Springs, just like the Streets of America section of Studios.  The Matterhorn, or maybe rename it if you had to, to be placed somewhere in EPCOT. Let’s face it the World Showcase is a bit of snooze fest, unless you are shopping or eating; maybe throw Alice In Wonderland ride into the United Kingdom Pavilion or Pinocchio’s Daring Journey in Italy.  Mickey’s Toontown should come back to the Magic Kingdom.  Mickey’s Toontown was nice when it was in the World, but it was tucked back behind Fantasyland and closed in 2011, again Walt Disney World has the space, so why not duplicate the Disneyland attraction in a nice space giving the guest another choice.  Of course maybe the company is living up the one of Walt Disney’s axiom, ‘you can’t top pigs with pigs‘.

Lastly, why not make every queuing area in the shade and with interactive displays and games, Disney has done great things with the Haunted Mansion, the Winnie the Pooh Ride and the videos games in Space Mountain, so it is time to make all the waiting areas just as positive and experience, adding to the ride.

Of course I can sit here at my computer like many other Disney Geeks, wishing upon stars, but I am not responsible for budgets, visitor numbers, and the bottom line to the stockholders.  I love the Disney parks in all their incarnations and phases, hopefully some day I will hit all the parks around the globe, but until that day I will dream and write.

As to what is the placement of the Disney Geeks in the pantheon of geekdom.  Well actually pretty high now that the company owns, Star Wars, the Marvel Cinematic Universe and the Muppets.  Will Disney Geeks ever get respect for following a Mouse and being fan boys and girls for Frozen, Toy Story and a Little Mermaid.  Who knows and who cares just don’t yuck my yum. 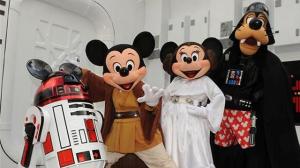 An article on the Walt Disney Wilderness Lodge