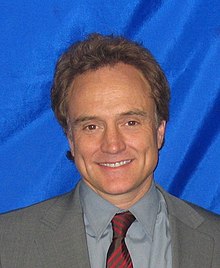 Bradley Whitford (born October 10, 1959) is an American actor and political activist. He garnered attention for his portrayal of White House Deputy Chief of Staff Josh Lyman in the NBC television political drama The West Wing (1999-2006), for which he was nominated for three consecutive Primetime Emmy Awards from 2001 to 2003, winning in 2001. This role also earned him three consecutive Golden Globe Award nominations.